Will Smith is one of the famous actors in the world. Known for dramatic and comedic roles, Smith has been an inspirational global icon.

Starting from Music, he entered TV series and then to Hollywood to dominate.

He had a big dream and did everything to achieve it. He was out of his comfort zone, which helped him to the Hollywood dream.

Will Smith featured in several commercially successful movies. He was nominated twice for Academy Awards in the Best Actor category. At first, for the film Muhammad Ali in 2001 and Pursuit of Happyness in 2006.

He is full of motivation. When you hear his speeches, it strikes your head with a bang. He is simply full of wisdom.

Here we collected some Inspirational Will Smith Quotes on Fear, Life Success, and More.

“The first step is you have to say that you can.” – Will Smith 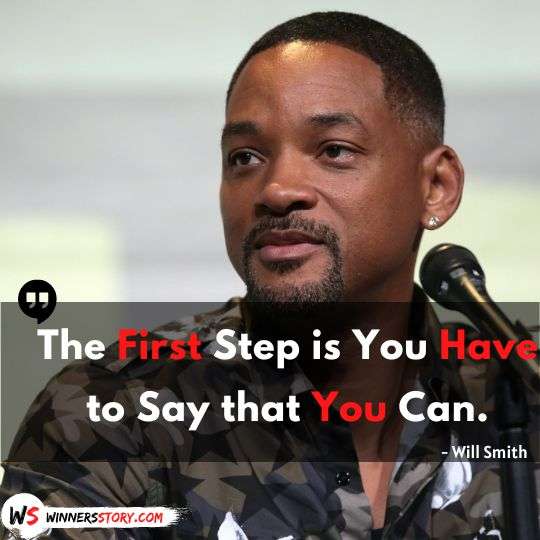 2. Work while others Sleep

“And where I excel is ridiculous, sickening, work ethic. You know, while the other guy’s sleeping? I’m working.” – Will Smith

“I want the world to be better because I was here.” – Will Smith

“I’ve always considered myself to be just average talent and what I have is a ridiculous insane obsessiveness for practice and preparation.” – Will Smith

“A rapper is about being completely true to yourself. Being an actor is about changing who you are.” – Will Smith

Will Smith Quotes about Fear

“Fear is not real. The only place that fear can exist is in our thoughts of the future. It is a product of our imagination, causing us to fear things that do not at present and may not ever exist. That is near insanity. Do not misunderstand me danger is very real but fear is a choice.” – Will Smith

Will Smith Quotes on Life

8. People will Make You Mad

“Throughout life, people will make you mad, disrespect you and treat you bad. Let God deal with the things they do because hate in your heart will consume you too.” – Will Smith

“So if you stay ready, you ain’t gotta get ready, and that is how I run my life.” – Will Smith

“Life is lived on the edge.” – Will Smith

11. Be here for a Bigger reason

“I don’t know what my calling is, but I want to be here for a bigger reason. I strive to be like the greatest people who have ever lived.” – Will Smith

“I’ve trained myself to illuminate the things in my personality that are likable and to hide and protect the things that are less likable.” – Will Smith

“Don’t chase people. Be yourself, do your own thing, and work hard. The right people, the ones who really belong in your life, will come to you. And stay.” – Will Smith 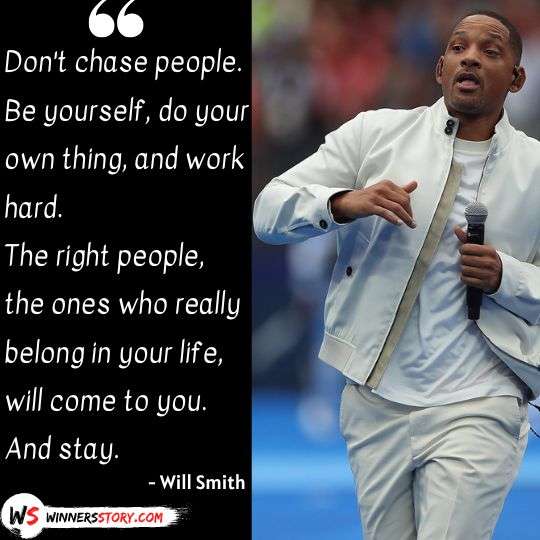 “Stop letting people who do so little for you control so much of your mind, feelings & emotions.” – Will Smith

“Being realistic is the most commonly traveled road to mediocrity.” – Will Smith

“If you’re not making someone else’s life better, then you are wasting your time. Your life will become better by making other people’s lives better.” – Will Smith

“I wake up every morning believing today is going to be better than yesterday.” – Will Smith

“Life isn’t how many breaths you take, but it’s the moments that take your breath away.” – Will Smith

Will Smith Best quotes on Success

“Money and success don’t change people; they merely amplify what is already there.” – Will Smith

“Whatever your dream is, every extra penny you have needs to be going to that.” – Will Smith “There’s no reason to have a plan B because it distracts from plan A.” – Will Smith

23. Greatness Exist in all of us

“Greatness is not this wonderful, esoteric, elusive, godlike feature that only the special among us will ever taste, it’s something that truly exists in all of us.” – Will Smith

“We spend money that we do not have, on things we do not need, to impress people who do not care.” – Will Smith Image Source: I am Legend via IMDB

Will Smith Quotes from the movie Pursuit of Happiness

“Don’t ever let somebody tell you. You can’t do something. Not even me.” – Will Smith (Chris Gardner) to Jaden Smith (Christopher) “You got a dream. You gotta protect it. People can’t do something themselves, they wanna tell you. You can’t do it. If you want something, go get it.” –Will Smith (Chris Gardner) to Jaden Smith (Christopher)

“Don’t just talk that talk, walk it and go forward. Also, the walk didn’t have to be long strides; baby steps counted too. Go forward.” – Will Smith (Chris Gardner) to Jaden Smith (Christopher)

27. Know How to Find the Answer

What are your Favorite Will Smith Quotes?  Comment below

40 Inspirational Dalai Lama Quotes that will Lighten Your Day